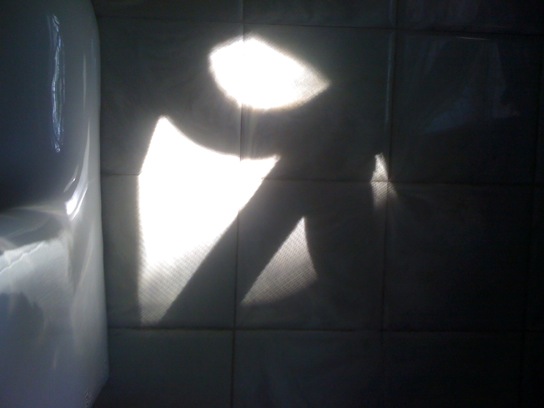 As I turned to washed my hands in the third floor bathroom of my 1920′s Georgian mansion-turned-office building, I saw the most beautiful shadow I’ve ever noticed. Maybe an odd place to contemplate beauty and life, but nonetheless, I was fascinated as I watched the evening sun play with the leaves and the arch of the window.

I had the sudden, second-nature instinct to video it or snap a photo, to find a way to keep it forever. The quick darting movement of the branches and the light as they swung back and forth against each other reminded me of those moving photos people keep making now, those series of two or three photos that make it look like a stop-action illustration.
In an instant, I saw it: the reaction to a reaction to a reaction. Art that imitates life that imitates art that imitates life.
Sometimes I love technology and everything that we can do with it to capture the world we live in. Without photos, some memories, both the important and the mundane, would be lost forever. Without video, we might forget things like what a loved one’s voice sounds like, or the way your grandmother’s dining room looked with everyone gathered around it as you blew out your candles out on your third birthday. Those moments would die with us. They would flicker and disappear like a beautiful but rather nondescript early September day.
As a writer I’m repeatedly struck with the urge to write things down, to transcribe every moment, every thought, every conversation. I don’t want to lose it, this moment that feels so pivotal and poignant. I’m afraid that I’ll forget, and that all these things that seem so necessary will slip through my fingers and that I will reach the end, not knowing who I am or how I got here.
But if I have to record it for it to last, was it ever that important?
And what will happen to our perception of lives lived?
I fear that if I’m only blogging and tweeting and photographing and documenting the happy things, the funny things, that I’ll look back on life with a false sense of reality, believing that things were less painful than they really were. Or that I will be wracked with an unidentifiable emptiness and disconnect to periods of my life that were filled with hardship, because only half of it is visible.
In our flurry to document and text and tweet and Facebook and Instagram it all, maybe instead of creating a new facet of permanence to our lives, we are instead losing our ability to remember and forget naturally, to live independent of the collective conscious, to appreciate a fleeting moment for the bittersweet thing that it is.

I took the photo anyway.

If only there existed a magic button for my life, one that I could press to give me that time and space my mind needs to feel rested again. Today I find myself feeling cramped and small and crazed, oppressed by my insecurity. Oppressed by my inability to juggle and format and finish the things I need to do. Do you ever feel that way? This is how I’ve felt intermittently for the last few weeks.
Summer is my favorite season, because I feel an exuberance in the warmth of each day, an unquenchable need to celebrate life in all its green and flourishing glory. Each wedding, party, cook out, firework, each slice of watermelon and ice cold beverage wet with condensation is a joy to me. I don’t want it to end.