I’ve written before about good conversations with close friends, but today I got to thinking about the hard conversations, the ones we seem to spend a lot of time and energy trying not to have.
As I scrounged late last night in frustration for one good thing to cling to on what turned out to be a rather horrid Monday, I remembered a conversation I had with one of my best friends earlier.

She had a wake to go to yesterday for a friend’s mother who passed away suddenly this week.
“Ugh. Funerals make me sad,” she said. “When I die, promise me you’ll celebrate my life and wear lots of bright colors, okay?”
“Will do! Please do the same for me… Is it weird that I sometimes hear songs and think ‘I want that played at my funeral?’” I asked, glad to finally confess this to someone.
“I totally do that all the time! And don’t worry, I’ve got you covered,” she replied.
“When I die, there should be karaoke, guitar hero, super bright colors and cake. Celebrate lives lived, not just the lives lost. Life is way too short, so go out and live it!” She soon posted on her Facebook status. Within minutes, several people responded with a ‘Like’ or comment in agreement.
“When I die, I want people to have a feast of scrumptious food and I want them to dance all night,” I told her.
We made a pact to write each other into our wills, to make sure that the other would be the “party planner” in the event of our death. Our initial brainstorms included a bachelorette party redux, but we thought the erotic cake might be a little over the top for our grieving relatives. We settled for posting pictures of good times we’ve had over the years.
As much as I hate to think of the death of someone who means so much to me, our conversation was the brightest part of my day. We always think that these are the things not to bring up, the things that don’t need to be discussed. [After all, we’re only in our twenties – who needs to think about dying yet…] But when you’ve had a crappy day at work, and you’re worried about money and bills and what your future holds, and you’re feeling the squelching pains of writer’s block, and you’re missing family so bad it hurts, do you really want to chat about the weather?
Sometimes, it’s the biggest sigh of relief, the deepest breath of fresh air to tell your best friend,
Yes. I will be there for you. Even then.
Suddenly, the thing you’ve been trying not to say or acknowledge, the really hard, awkward conversation you don’t want to discuss, turns out to be the only thing worth saying.
Don’t be afraid to say that one thing that might open the floodgate to admitting that life is hard and scary and short, and beautiful and joyous and worth celebrating, even as we say goodbye to it.
—
(Picture courtesy of the lovely Erin Lee, taken about a bizzilion years ago… or maybe only 5. I can’t believe it’s been that long! I love you, Rachie. <3)
I’ve sat down several times in the last several days. My fingers poise ready at the keys, my thoughts and feelings wait breathlessly on the edge of spilling over. In my head, I’m telling you things that I’m thinking and feeling in a way that will benefit you, help you articulate and examine your own life and share that with others, make you feel better about the ample amount of things you deal with everyday.
And then this is what comes out:
This sucks. Life is hard. The End.
Don’t like that one? Me either.
Turns out it’s not easy to write when you’re sitting in the dark.
I’ve had some hard days lately, friends. They’re good, in a see-the-big-picture kind of way, in a you-know-Who-loves-you kind of way, but they’re still hard. Details spared, I’ve been thinking a lot about the things that make our fragile, sensitive human spirits rise up out of the hard, frustrating, frightening mire of everyday life. What inspires us when we’re in the dark, desolate places of our lives? And why?
I don’t have those answers yet, but I’ll leave you with a few of these, which have a brighter, clearer perspective than I do at the moment. Sometimes, when you can’t say it, feel it, see it, you just have to surround yourself with people who can in hopes that some of their light seeps into the dark spaces in your soul.
A few lights for you:
A gorgeous poem from Edward Hirsch.
A life-affirming quote from Anais Nin.
A good thought from Jon Acuff: We don’t have to finish what we don’t start.
Remember, friends: time is of the essence, so don’t waste it.
A daily dose of encouragement for those who write, freelance, or can appreciate a blog that is both well written AND well designed.
The sweet, soothing lullaby of a new album from one of my all time favorites.
Song lyrics you can cling to and sing to yourself in the dark:
“I was walking far from home
But I carried your letters all the while
I saw lovers in a window
Whisper, ‘Want me like time, want me like time’
I saw sickness, bloom in fruit trees
I saw blood and a bit of it was mine…
I was walking far from home
Where the names were not burned along the wall
Saw a wet road form a circle
And it came like a call, came like a call
From the Lord.”
And a special love link to all the people in my life that make it worth it – the everyday. Dark or light, I know I’m not sitting alone. [Galatians 6:2] 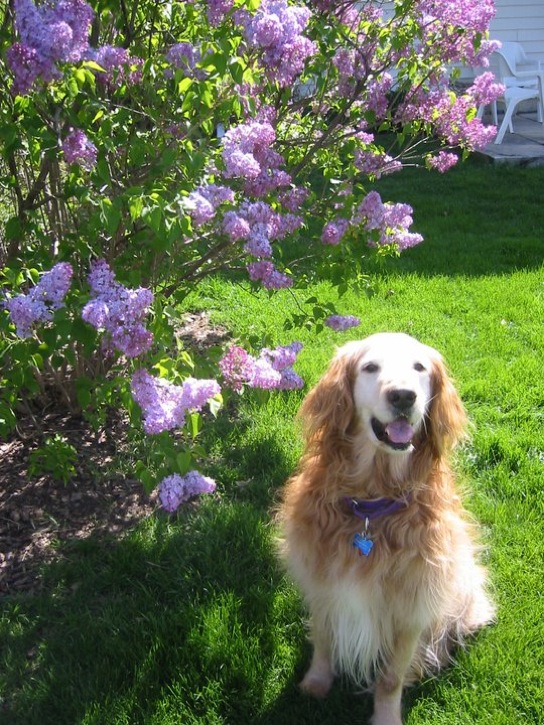 On Friday, our family (my husband, his sister, his parents and I) said goodbye to the family patriarch, our dear old dog, Duncan. A real downer, I know, but he lived a long, good life.

A long, good life, I should mention, in spite of nine long years of neglect and abuse. When his rescuers found him, his fur was so matted he couldn’t walk. His fear of humans was so fierce, they had to sedate him. His body was so malnourished, he nearly starved to death.

You would think that a dog who has dealt with that measure of brutality would be irreversibly messed up, rightfully unwilling to trust another human being ever again. Not Duncan.

His is a story of hope. As Good as Gold [a rescue organization dedicated to golden retrievers] rescued him, rehabilitated him and found him a loving home with my in-laws. Aside from his desperate begging habit and distrust of children, his past was far removed from his present peace and happiness. Duncan turned out to be a friendly, quiet, cuddly companion that our family absolutely adored.

And then, after what seemed like 6 very short years, he became very ill and we had to put his tough old body to rest.

It happened so fast. Thursday, my husband spent the morning cuddling with him and playing tug-of-war. Friday, Duncan couldn’t eat, couldn’t walk, could barely lift his head to look Mom in the eye. A tumor had developed and grown to the size of a grapefruit in the 5 short months since his last visit to the vet until his body couldn’t handle it anymore. The arthritis in his back and hips would have made healing from an extensive surgery impossible. We decided to let him rest in peace instead.

The brevity and finality of it, the ache of the unexpected goodbye, the shock of suddenly being alone really really sucks.

And he was a dog. He was a member of our family, a dear old friend, but he was a dog. Having never lost a pet before, only people, this has been a strange grief for me to comprehend.

It hurts. In a separate, but all too familiar kind of pain, it hurts. We miss him. The soft tendrils of his fur between our fingers; the enthusiastic dash to the door with his big droopy eyes and swishing tail there to greet us, to tell us he’s happy we’re here; his cool, wet nose brushing our elbows as we sat at the dinner table; the warmth of his body next to ours on the couch; even the simple sense that we have someone outside of ourselves to care for, leaves an acute sense of loss.

Yet in the wake of his death, I’m not just struck by the void of his presence, but by the palpable reminder he gave us with his life: that hope, trust and redemption are real.

Maybe innocent animals are not as emotionally, mentally and spiritually complex as us humans… But then again, humans have a spectacular capability to complicate the most simple and fundamental truths in our lives.

Now, whenever I begin to lose my faith in change, in restoration, in redemption, I’ll remember the feather-soft fur beneath my fingers as a tangible truth:

Even after we’ve experienced the most degrading, abusive, dark moments of our lives, it is possible to uncover truth, restore trust, feel joy. It is possible to find love.