The last time I went to visit your grave was two years ago. That Michigan summer was cool and rainy, the evening overcast and humid. I drove alone to the cemetery with a potted plant to place beside your headstone. But when I got out of the car I was greeted by a thick cloud of mosquitoes. Even through my jacket and leggings I could feel their stings. Frustrated, I turned around and dashed back into the car. I stared at the plot from my window for a few minutes before I turned the key in the ignition and drove away slowly.

Dad got married that summer. Jacob got married later that fall. We went home at Christmas but I didn’t come back to your graveside then either. It was a long time before I went home again. I said it was because we were trying to save money, and because we had too many other obligations. It’s not untrue, it’s just not the only truth.

The truth is you can never go home again.

It’s a breezy morning in April when I finally come back. The Monday after Easter. It’s my first trip home in a long time. We don’t stay in the house where I grew up. We don’t have the same big family gathering for holidays anymore. There are different places and new people and a whole life that we never imagined living when you left us, most of it good but all of it bittersweet.

I plant a tulip beside you.

The tears I thought weren’t there are on my cheeks suddenly, as if they never left me.

I am not fine.

The thing I thought would eat me alive has not, but I feel every tiny sting.

I come to you a version of myself that I’m not sure either of us recognize, but I’m all me just the same. 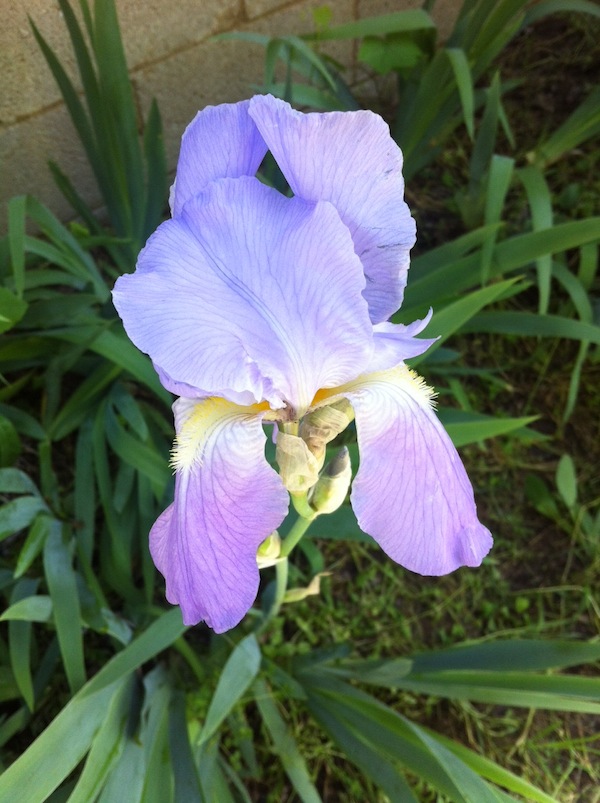 There’s a bed of purple irises in our backyard. A single blossom has unfurled, and it evokes warm memories of my mother, all those late spring days when she would weed the flower beds at the front of the house, and the irises seemed to multiply by hundreds every year, their heavy heads bowing in the May sun.

In many ways, I feel like I’m not in a place right now to be grateful for what happened to us. Time presses on, and the weight of meaning-making feels impossibly hard to bear.

And yet, these memories sprout up anyway. They both anchor and undo me, all at once. They are the leaves I grow and shed, over and over again, that feed the soul-soil of who I am. It’s an ongoing existence of death and rebirth. That’s what grief is to me – death and rebirth, death and rebirth. Some seasons are uglier and harder than others, and I’m sure I can never recover these winters. And some seasons I turn toward the sun, arms outstretched, like all those irises my mother planted, growing by the years.

So today, yes, I bow my head. Thank you, thank you. 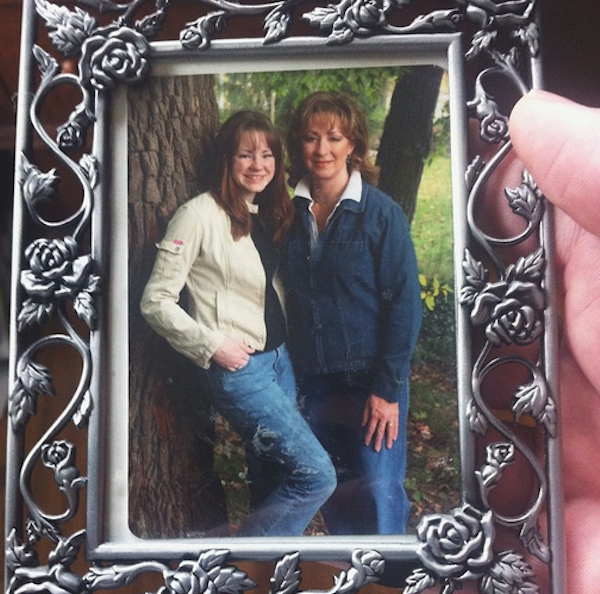 This morning I looked through a stack of photos. It’s a ritual of remembering I set aside for this day every year, to honor you. I pause and let myself feel fully the weight of your absence. I come to grips with the reality, searching through this stack of photos, that I’ll never find what I’m searching for: you, present tense. You, with me as I am now. A picture of you, age 53, and me, age 27, arms around each other, smiling. The stack of photos in my hand feels so finite. I’m holding a window of time, a fixed frame, a chapter in a book.

I miss you, mom. I always will.

Recent past eclipses healthy memories,
those days when your smile and skin glowed happy,
what do we remember from before?
all of us were young and unaware of a soon and threatening after,
of a life later,
when the living room is empty of you,
when sad, silent objects sit in your void.

Tears come, a slow tide of grief in the dark,
or in a swell surrounded by a sea of strangers,
an angry rock of grief grows in my throat as I flee
to bathroom, closet, closed door.
I drive apologetic and repentant all the way to work each morning,
all the way home at night, mascara running along the road with me.

And when I think that faith has failed me,
“Take a deep breath,” you say.
The sun glows bright against glistening pavement,
a sparrow flies fast and free above me,

“Until I see you again,”
I whisper,
“Beatific, wholly holy, alive and well.”

This article was originally published on ProdigalMagazine.com.
I stepped quietly into the room where my mother lay sleeping and walked to her bedside. I took her hand, thin and bony, and held it to my face. Struggling not to cry, I leaned down and kissed her forehead.“Mom,” I whispered, “The nurses are going to put a tube through your nose and into your stomach to drain it. It will help you not feel nauseous anymore, okay? So don’t panic. They’re here to help you and as long as you hold still, it won’t hurt.”

At first she didn’t respond. I didn’t think she could hear me, but then she opened her eyes and turned to me and smiled. “I just saw Jesus,” she said. “He told me…”

Whatever insight Jesus had made my mother privy to, it was lost in a garble of sleepy syllables, but her thin hands arched above her as she tried to explain. She laughed quietly and smiled at me, happier than I’d seen her in days.Then, for reasons I still cannot articulate, I felt moved to sing to her our favorite hymn, “Great is Thy Faithfulness.”

“Great is thy faithfulness, O God my Father;
there is no shadow of turning with thee…”

I made it through the first line before tears choked my voice, but she, who had barely talked in days, smiled at the sound, and proceeded to sing the rest of the verse and the first chorus back to me. Her voice was clear and unhindered, the way it used to be when she sang solos at church. She was even mostly on key.

And this thought popped into my head, “I’m closer than you think.”

And along with those words an image : Jesus, gently and patiently and lovingly coaxing my mother away from this world and into the next. In that moment, a peace and a joy descended on me, something that I had not felt in more than a year.

After 14 years of fighting against breast cancer, her body had had enough. I watched her vomit several times a day for months before that, watched her abdomen distend not with fat but with fluid, while the rest of her body withered until she was Auschwitz thin.

Forgive my graphic description. There’s something about terminal illness that strips us of our preferred pretenses, the things we wish we didn’t know.

And there is something about watching the people we love die that kind of death that shifts our perspectives on life, on the eternal. It’s an experience akin to staring, nose-to-paper at a stereogram until suddenly, Bugs Bunny’s giant face emerges three-dimensional from empty, chaotic design.

How foolish I was, how flat and empty and selective was my concept of God’s grace.

In the days before and the days immediately following my mother’s death, life took on a distinct and urgent spirituality. The gap between where I placed God and Heaven and the spiritual world and where I lived my every day life, down here on this tiny planet earth, grew smaller and smaller as I listened to that still, small voice, “I’m closer than you think.”

It didn’t ease the grief of our goodbye. However, my hatred for life, my distrust of God, my self-perpetuated isolation from His Spirit was not something I clung to anymore.

I wasn’t ready to be motherless, but I was finally ready and able to pray that impossible prayer, God, Please take her Home.