I came home last night motivated to get my life our apartment in working order – a clean kitchen, washed, dried and folded laundry, sorted mail, dinner on the table by the time my husband arrived home. Recently I’ve not been disciplined as often as I should be about these things, and it leaves me with a nagging, constant guilt that eventually becomes impossible to ignore.
So I was nearly done making dinner, a quick batch of carbonara pasta, when I realized at the worst possible moment that I had no parmesan. The pasta was cooked and waiting. The zucchini and bacon were already a little overdone. What to do? In a nerve-wracking attempt to salvage my hard work I took the only cheese I had, feta, and mixed it in before I could change my mind. The result? It was not only edible, but oddly delicious. [Note for you culinary nerds that might be wondering: no, thank God, I had not stirred in the egg yet. Not sure how that would’ve turned out. Anyone tried it?]
My dishwashing attempts were likewise thwarted. Aside from the obvious liquid versus dry granules, there are significant differences between dish soap and dishwasher soap. I swallowed my sneaking suspicions and used the liquid dish soap since we were out of the dishwasher soap to save myself an extra hour of washing by hand. Result? My dishwasher was foaming at the mouth, spilling suds all over the floor. You can imagine my surprise as I flipped on the light to grab a glass of water. Perhaps it would have been better if I hadn’t filled the entire dispenser with the liquid soap, but oh well. To my own surprise, instead of freaking out like I’ve been prone to do on several pithy, fleeting occasions lately, I laughed out loud, alone in my apartment. And why not make a slip-n-slide mop the floor while I’m at it? My kitchen floor is now nearly clean enough to eat off of.
There on my hands and knees in the suds and scrubbing away at long-neglected grime, I thought once again about how hard it’s been for me to stay motivated during the last few months. With my mom struggling harder than ever against the cancer and the subsequent treatments and surgeries, I’ve been worried, angry, depressed. I’ve allowed the what-ifs and the should-haves to keep me unsettled, insecure. I’ve let two dominant, separate and equally loud voices to split myself apart, one that tells me,
“Stop forcing the moment and admit your fear. Cry. You’ll feel better.”
and the other that argues back,
“Get up. Move on. Forge ahead. Don’t stop for anything.”
And as a writer, these two voices have left me unproductive and indecisive. One part of me says,
“Write when you want to. You can’t force yourself. Wait for the lightbulb.”
and the other chides my artsy immaturity,
“If you’d just make time for your writing on a daily basis, the words will come. Make your passion your priority.”
Which is right? Which is better for me? Which will help me keep going?
With no right answer unveiled, I’ve let my habits become dormant and my emotions ebb and flow unchecked. I’ve been quiet around here, afraid of being too vulnerable, afraid that admitting anything will mean that I’m asking for a pity-party, wary of all the awkward flubs that people make when they don’t know how to handle a person’s grief.
I haven’t wanted to see the silver lining in anything for awhile, far too exhausted and angry to think that good things can come from this, soul-growing things, eternal things. What I want is a healthy, happy, whole family that can think about the next few months, years, even decades without the elephant in the room to block our perspective. What I want is normal, in the here and now.
Maybe it seems silly that screwing up dinner and accidentally Ajax-ing the linoleum gave me some much-needed perspective on my inner battles. But there I was on the kitchen floor, up to my elbows in normal and the residue of everyday life, suddenly and strangely comforted by this awareness: I can’t control any of it. And for once it wasn’t a hopeless feeling, but an understanding that things can still turn out well even if they don’t go as planned. I can work hard, or I can take the time I need to let my emotions run their course. Either way, I’ll be okay.
It wasn’t a sickly sweet silver-lining that obscured the reality I’m facing, just a comfort to know that I can find motivation to do the simple things, be happy in the moment, and still find reasons to laugh about the mess that I am, inside and out.
This Thursday my mom will turn the big 5-0. Birthdays are always special, but this one feels especially victorious. She’s made it through a hard year struggling with treatment after treatment, surgery after surgery to combat her metastatic breast cancer.
And so we thought, what better reason to celebrate this milestone than with a surprise birthday party full of friends, family, flowers and good food? 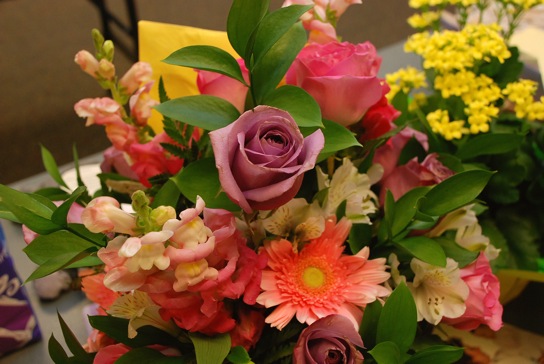 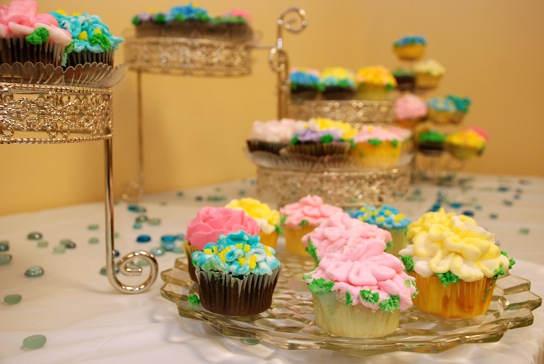 My aunts [my dad’s sister and his brothers’ wives, and my mother’s sister], cousins and I emailed, called, schemed, and prayed for months to plan the party. And then we baked, and cooked, and whipped, and frosted, and decorated, and talked, and laughed. 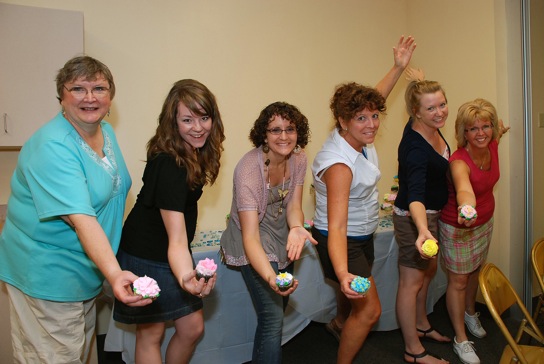 It took a lot of prayer, a lot of planning, a lot of lying through my teeth and maybe more frosting than one body should really consume in one weekend, but we pulled it off. She was surprised!
No one spilled the beans, even though most of the party guests saw her in church yesterday morning. In faith, we refrained from canceling it even though she spent a few days in the hospital last week.
And in faith, we celebrated, thanking God for a beautiful day full of energy and joy and time together. 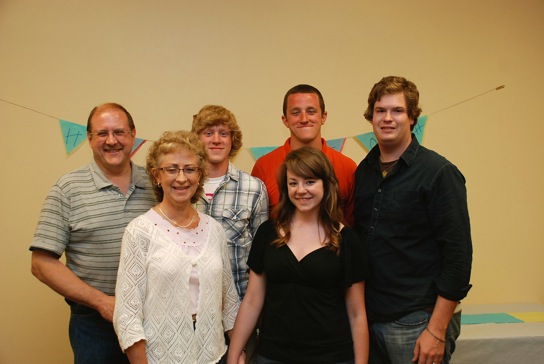 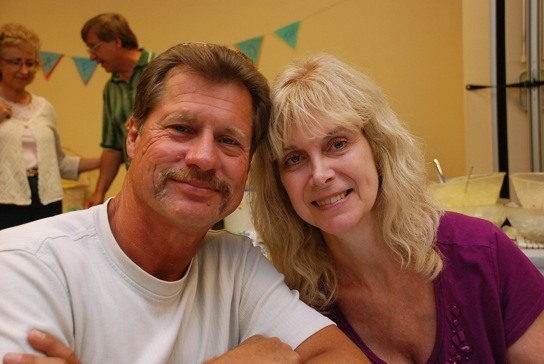 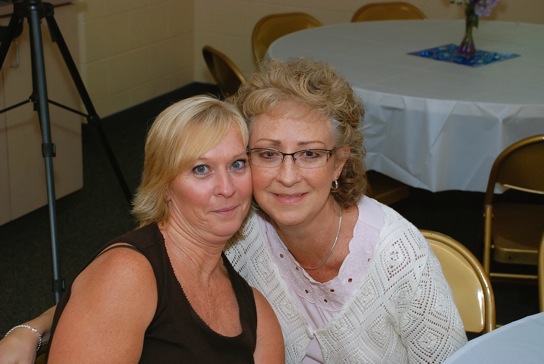 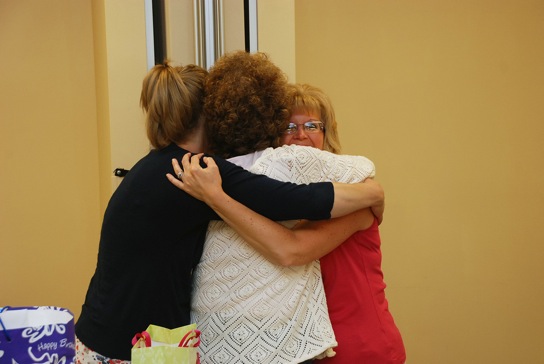 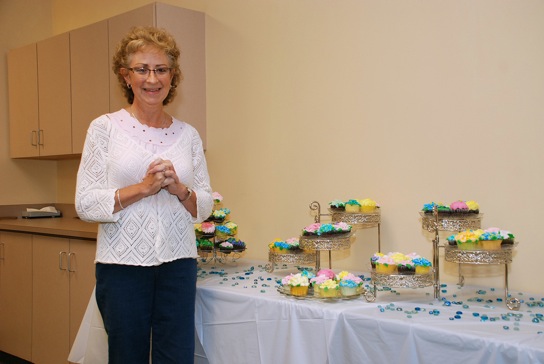 It was everything we could have hoped for. I’m a happy, relieved, thankful kind of exhausted.
Maybe you and your family have reason to worry, to wonder what the next few months and years will be like, to think that maybe now is not the time to celebrate. I know how that feels.
But this weekend, all my fear and concern and doubt was replaced by something much more important :
Faith.
Faith to believe that even though it seems like a time to fear the future, tomorrow will be a good day. Faith to believe that life is worth celebrating, even when it’s hard. Faith to believe that He knows our hopes and plans, and He’s working on our behalf.
So, don’t hesitate to celebrate. Do it now. Do it while you can, even if you can’t be sure what today, tomorrow, or next week will hold. Do it together, because family is our best resource for support and strength.
Pray hard. Make memories. Eat everything. And whatever happens, choose to celebrate.
I’ll tell you the truth : I love October, but I hate breast cancer awareness month.
Please hear me out, because I’m the daughter of a breast cancer survivor.
To make a very long and painful story extremely short, my mother was diagnosed with breast cancer 13 years ago. She had a mastectomy, chemo, and went into remission. Five years later, she was diagnosed with metastatic breast cancer – breast cancer that had moved to other parts of her body. First, it was a tumor that had wrapped itself around one of her lower vertebrae. Then, it was her femur, her humerus, her ribs. She had radiation treatments. She found a cancer treatment center to go to where the doctors could give her more holistic treatment options. She started taking vitamins and eating better and pursuing clinical trial treatments that might help her. In 2008, we found out that it spread to her liver. She still kept moving forward, finding more ways to treat her illness. Her list of treatments and counter-treatments is a million miles long.
Eight years after her second diagnosis, here she is. And here I am. We’ve learned a lot about what’s important to us, and we’ve learned that we are blessed beyond our wildest understandings. But that’s not to say that the heartache of living with cancer isn’t abundantly, painfully real to us.
We pray that someone finds a cure to this disease. We pray that others find the strength and the faith to battle their own diagnoses and that they can learn to advocate for themselves. We pray that people learn to pay attention to their own bodies, their own health histories, their own well-being.
However, I just cannot stomach the pink-ribboned, horrifically over-sexualized, over-commercialized breast cancer “awareness” campaigns that have come out in recent years. Whether it’s buying a bag of chips with a pink ribbon on it, sporting a “Feel Your Boobies” t-shirt, or posting a vague and suspiciously sexual statement in a Facebook status, it has all become an easy target for manufacturers and commercial advertisers to target their most vulnerable and influential demographic: women.
Should we be donating to a good cause and raising awareness? Yes. But at what cost?
Even the products that sport the pink ribbon have been known to contain harmful cancer-causing chemicals. And there are other campaigns meant to “raise awareness” that raise questions about their moral and ethical treatment of women.
So the question becomes: are these companies milking the breast cancer issue and are you willing to continue buying into their exploitation?
Because here’s the thing: raising awareness and finding a cure breast cancer is a good cause. But not all campaigns “for a good cause” are good for us.