I stumbled across this yesterday. Isn’t it fantastic?

In Love, His Grammar Grew
BY STEPHEN DUNN

In love, his grammar grew
rich with intensifiers, and adverbs fell
madly from the sky like pheasants
for the peasantry, and he, as sated
as they were, lolled under shade trees
until roused by moonlight
and the beautiful fraternal twins
and and but. Oh that was when
he knew he couldn’t resist
a conjunction of any kind.
One said accumulate, the other
was a doubter who loved the wind
and the mind that cleans up after it.
For love
he wanted to break all the rules,
light a candle behind a sentence
named Sheila, always running on
and wishing to be stopped
by the hard button of a period.
Sometimes, in desperation, he’d look
toward a mannequin or a window dresser
with a penchant for parsing.
But mostly he wanted you, Sheila,
and the adjectives that could precede
and change you: bluesy, fly-by-night,
queen of all that is and might be. 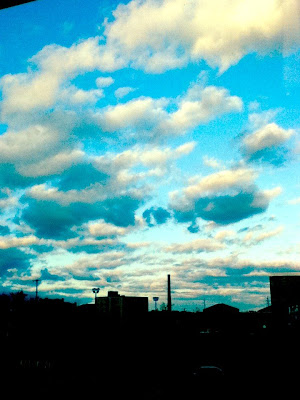 I feel the wind in my face.
I see nothing but space, color and light.
I dream.
I drift as the sky carries me away.
I close my eyes and savor the moment.
I feel the warm light against my face.
I am lifted higher.
I begin to soar, up and down, all around.
I drift away as the sky continues to open.
I find even more colors above.
I continue to drift in the heavens.
As I drift towards you.

Jim Woods is a dreamer, writer, and guitar junkie living in Nashville. Jim writes to inspire others to pursue their passions and follow their dreams. You can read Jim’s blog at www.unknownjim.com.

Yes, I suppose I’ve stayed in bed too long,
till noon,
tangling myself between sheets,
roaming the untouched corners of my mind
while my head is held comforted
by pillows.
It’s the only way,
these lazy Saturdays,
while the white noise of neighbors’ water runs
and planes of busy people
fly high above me.
At the peak of daytime,
I am only just beginning;
better that I make this transition
slowly,
than rush myself through
taking note of nothing.
Run along without me.
Let me savor sleep
and hold myself
in the quietness of simply being.

I heard an excerpt of this poem on my favorite morning radio show this morning, during a report about the Poetry Foundation. I howled with laughter at the first line, and delighted in the words as they flowed on.

Mingus at the Showplace

I was miserable, of course, for I was seventeen,
and so I swung into action and wrote a poem,
and it was miserable, for that was how I thought
poetry worked: you digested experience and shat
literature.

Read the rest of the poem here.
And I am so thankful that in the digital age, radio hasn’t died, and neither has poetry. Happy Wednesday, friends. 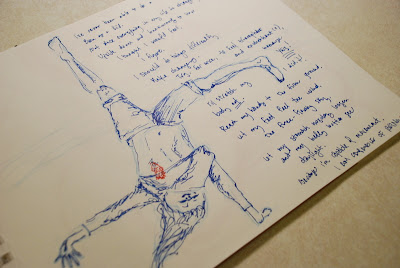 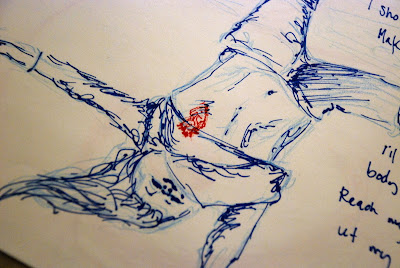 I’ve never been able to cartwheel.
Even as a kid.
But since everything in my life is changing,
Upside down and backwards to how
I thought I would feel,
I figure,
I should do things differently.
Make changes.
Try, for once, to feel triumphant,
exuberant,
because
YES!
I did it!
I’ll stretch my body out.
Reach my hands to the firm ground.
Let my feet feel the wind,
the free-flowing sky.
Let my stomach muscles loosen
and my belly-button see daylight.
Because I am capable of movement.
I am capable of being moved.