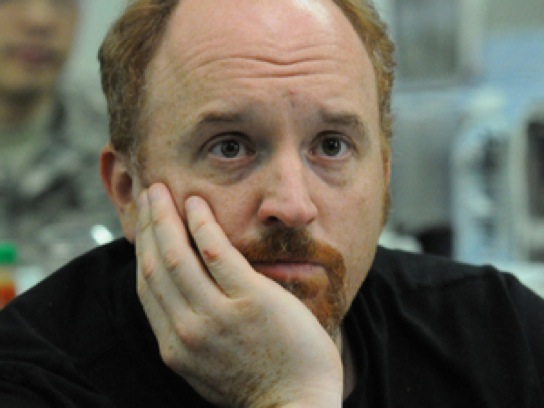 The following is a quote from comedian Louis CK in an interview with Terry Gross on Fresh Air from a couple of weeks ago. I found this bit about script writing especially insightful. Louis had decided to write an episode for his FX series, Louie, based on some of his fellow comedians, in which a friend has informed him that he has decided to commit suicide. Louis wrote the episode mere months before his friend and fellow comedian Patrice O’Neal died of complications from diabetes.

Gross : Have you been in that position where somebody’s told you that they want to kill themselves and you have to decide what are you supposed to do with that?

C.K. : Well, it’s a scary thing to ponder, you know, but it’s emotional to hear that clip now because, I mean, I wrote that about a lot of comedians I knew coming up and comedy and show business are very cruel and they don’t have a nice way of saying no or good-bye, you know? And a lot of guys live really tough lives in this racket.

And I’ve known a lot of them and come up with some of them and some have made it, some haven’t. And, you know, the idea of somebody saying to you look me in the eye and tell me I have a reason to live, it’s terrifying to think, well, what if I fail them in that moment?…

And, you know, it’s just funny because I have such a different perspective on that issue of, like, someone’s not taking care of themselves. Someone’s not keeping themselves safe, and what is your role in that? And the anger I feel towards Doug in that scene is the kind of anger I feel about Patrice now that he’s gone. So it’s interesting to look back on it because the thing – the place I took myself in that scene, as I was writing it, I didn’t know where it was going. I knew I wanted to stand on that street and have him give me that news and I didn’t know where I wanted it to go. So I started writing to him my argument why not to kill yourself, and as I was writing it I realized for this argument to succeed would be really gross. For me to, like, be the guy who gives him the reason to live is so self-serving.

And the fact that I was even attempting it on paper, I was embarrassed alone in a room. And so the way that I – the path I found to the truth of the scene for me was having Doug be the one to tell me how full of crap I was for trying it. So in other words, as I was sitting there typing here’s why you shouldn’t kill yourself, I stopped and said to myself, oh my god. Congratulations, you pig. You know, who do you think you are? And so then I had Doug basically say that.

I think the quote speaks for itself, but I will say that this is something I contemplate often. In my younger years of writing, I felt afraid of writing what I know, afraid that if I wrote it, it might not be the truth because it’s just me and my perspective. Yet, I have this desperation to write and life as I experience it only spurs me toward writing more. I have to tell this story, I think to myself. How do I tell it truthfully? Will others understand what I mean by what I write?

But the truth is what you know when you’re writing in a room alone. It’s what you uncover, beneath layers of drafts and words and ideas, once you sit down. It is scary because it is real. Don’t be afraid to write the truth.